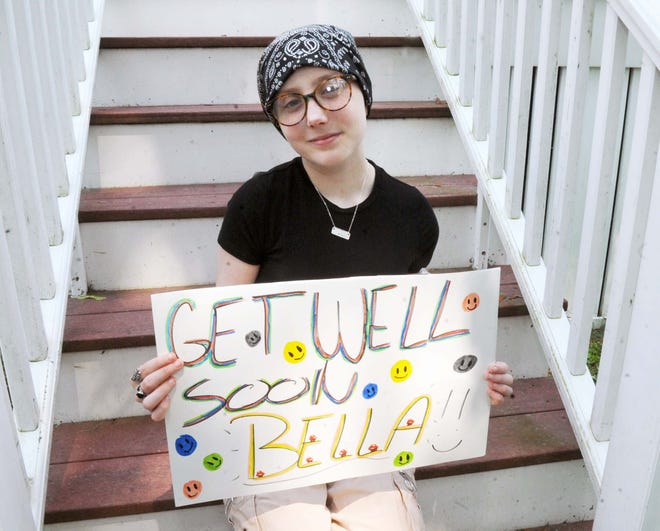 WEST BRIDGEWATER – Fourteen-year-old Bella DuBois began to experience arm pain that gradually got worse and sought answers online. Among the list of potential causes was a tumor, which took her anxiety to the next level.

The teenager was convinced and told her friends and family that she had a tumor, and some tried to reassure her that she didn’t. Even when Bella saw an arm specialist, the doctor said before the x-rays came back that she probably didn’t have any.

But Bella was right. At the end of May, she was diagnosed with osteosarcoma, a type of bone cancer.

“They knew immediately what it was,” said Tracy DuBois, Bella’s mother, when doctors saw her x-rays.

Doctors found a tumor on Bella’s left arm and lumps on her lungs and back.

The teenager started cancer treatment within a week. Since June, Bella has completed four cycles of chemotherapy through Boston Children’s Hospital and the Dana-Farber Cancer Institute.

Bella said the first round relieved a lot of her pain and her shoulder became less swollen.

She will undergo another round of chemotherapy before surgery scheduled for August 6 to remove the tumor on her arm. Bella will continue with another 18 weeks of chemotherapy, possibly followed by radiation therapy and other surgeries.

In total, her treatment is expected to last between nine months to a year, said Tracy DuBois.

Bella named her tumor Betsy and when she talks to the doctors about it, they call the tumor by that name.

â€œBetsy is Betsy,â€ said Bella, adding that when they talk about how the tumor is shrinking, they are saying Betsy is shrinking.

She also has a device called a port installed on her chest to help draw blood more easily than having to prick the veins in her arm repeatedly. Bella named her port Annie after a character from one of her favorite shows, the “Attack on Titan” anime.

After:” What are the chances ? Â»: In Bridgewater, parents of 3 young children are double diagnosed with cancer

Bella will be a freshman at West Bridgeawater Middle-Senior High School in the fall, but due to her ongoing treatments, she and her mother don’t know how much she will be able to attend school.

Chemotherapy often leaves Bella tired and sick. For one of the cancer drugs she is taking, Bella has to drink plenty of fluids and wait for the drug to be cleared from her body.

â€œ(The doctors) are very confident that the chemotherapy and surgery will work,â€ said Tracy DuBois.

Osteosarcoma can lead to amputation, but doctors have said they could likely save Bella’s arm, her mother said.

Tracy DuBois thanked the school nurse and Bella’s pediatrician for helping them reduce the potential causes of her pain. Before, she said they looked for neurological causes, like a pinched nerve, as the reason for Bella’s pain.

Initially, the teenager, her mother and others believed the pain was from spinal fusion surgery Bella had in November 2020 for scoliosis.

Her father, Robert, and mother are not together, but he supported and accompanied Bella to medical exams and visited her while she was in the hospital.

Bella has a younger brother, Thomas, who is 10, who Tracy DuBois says has been supportive and flexible throughout her sister’s treatments. He often has to stay with his family when they go to the hospital.

Throughout her constant visits to doctors’ offices and the hospital, Bella has maintained a positive state of mind, her mother said.

â€œBella has the best attitude,â€ said Tracy DuBois. “She is incredible.”

She might have felt sad when doctors told her she was likely to lose her hair during treatment. Instead, Bella wanted to cut everything.

Starting at shoulder length, she experimented with a few hairstyles including bangs, pixie cut and mullet, before having her head shaved. Bella did some of the shaving herself.

She wears her hair bald or wrapped in a bandana. Bella said she would consider buying a cool colored wig.

They waited until the diagnosis was confirmed before telling the others about Bella’s cancer. In June, Tracy DuBois and close friends launched a public Facebook group called “Beautiful Warrior Bella’s Battle” to share updates.

It’s been especially helpful for family members who don’t live in Massachusetts, said Tracy DuBois, and the group has been a place for people to share messages.

Before the end of the school year, when Bella started chemotherapy, students and townspeople lined up outside the high school and cheered with signs as she left for the hospital.

There has also been financial support in the form of fundraising, such as a spin event last weekend at Cycle Life Studio in Whitman.

Tracy DuBois has been on paid family leave from her job at the Old Colony YMCA to care for Bella. To help support the family, a GoFundMe has been set up with a goal of $ 50,000. As of Saturday, donors have given over $ 20,000.

The 14-year-old enjoys photography and has been a part of her school’s drama and choir programs. Bella loves music and says it helps calm her down when she is stressed.

Her two cats, Pumpkin and Spice, cuddle with her to help her feel better and miss her and her mother when they are away.

â€œ(My cats) are my pride and joy and they keep me going,â€ said Bella.

After the treatment, she looks forward to seeing her friends again and participating in her school’s drama production.

Bella would love to travel again, including overseas. Its destination is the Maldives, an archipelago located in the southwest of India. She would like to go to the beach and stay in a bungalow by the water.

Editor-in-Chief Mina Corpuz can be contacted by email at [email protected] You can follow her on Twitter @mlcorpuz. Support local journalism by purchasing a digital or print subscription to The Enterprise today.