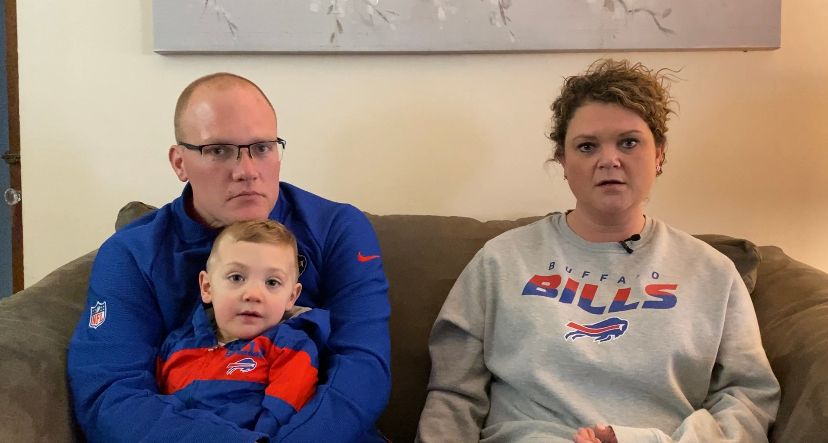 ELMIRA, NY — Carter Brimmer is a regular 2-year-old. He loves running, playing hockey and cuddling his pets, but Carter’s first year of life was not typical.

What do you want to know

“He had to lie on his stomach only. It’s the only way for him to breathe on his own,” said Sarah Brimmer, Carter’s mother. “Gravity was pulling his tongue forward a bit, but his chin was pushed back so much that his tongue was actually in his throat. And that’s why his palate was never able to form in utero, so he had a cleft palate.

Three days after birth, Carter was airlifted to Oishei Children’s Hospital in Buffalo, and he remained in the NICU for 96 days. He had to undergo surgery to move his jaw forward.

“He had two big metal pins hanging from his chin, and they turned them once a day, and it moved his jaw forward a millimeter every day until they got him where they wanted him to be” , said Sarah Brimmer.

Carter’s jaw was essentially moved 17 millimeters forward. He was sent home with a feeding tube that went straight into his stomach and he used it for about a year afterwards. His family looks back on this period in the hospital and describes it as traumatic.

“A big part of what got me through the whole situation is that he won’t remember anything,” said Adam Brimmer, Carter’s father. “So that kind of helped me, and you also just have to trust the doctors and the nurses.”

Dr. Michael Markiewicz was the craniomaxillofacial surgeon who worked to return Carter’s jaw to normal. He says there are many other types of birth defects and they are not limited to the face.

“A big deal is taking prenatal vitamins, which are mostly your B vitamins plus iron, but specifically folate or folic acid,” said Dr. Robert Perry, medical director of pediatric plastic surgery at the Oishei Children’s Hospital.

“Smoking is another,” Dr. Perry said. “Smoking has been linked to a variety of birth defects.”

These are just a few ways to prevent birth defects. But you can do everything right and have a healthy pregnancy while having a baby born with a birth defect. That’s what happened to Sarah Brimmer. Bringing Carter home was a joyful occasion, both for her family and her doctors.

“Seeing Carter before he left the hospital, normal, breathing on his own, eating, was really special and that’s what made it worth it,” Dr. Markiewicz said.

Patient-reported impact of postponing surgery during the COVID-19 pandemic