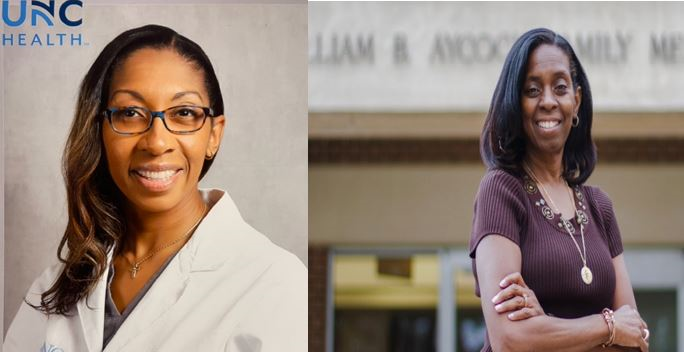 The story of Honey Mone’t Jones (pictured left), an Acu

The story of Honey Mone’t Jones (pictured left), an acute care nurse practitioner at UNC Medical Center’s MICU, and her mother, Venus Standard (pictured right), a certified nurse midwife and current teacher assistant at the UNC School of Medicine and Department of Family Medicine, is not a typical mother-daughter story.

“I was a nurse first,” Jones said with a laugh.

Standard previously had a number of jobs, including as a photographer, massage therapist and entrepreneur, as Jones, an only child, grew up.

Both originally from New York, Jones came to North Carolina for college. She received her bachelor’s degree from UNC in 2000.

However, a slight change in plans occurred as she approached her final undergraduate year. She started working at the hospital as the Health Unit Coordinator (HUC). There, she became interested in intensive care spaces. She also began to be more drawn to nursing, citing work-life balance.

After getting her RN from Watts School of Nursing, she went on to work in various critical and intensive care units. She eventually earned her Doctor of Nursing Practice (DNP) degree from Duke University School of Nursing.

Standard enjoyed watching his daughter’s progress and hard work. “It was amazing to watch her grow and see her become the professional that she has,” she said.

Jones credits her perseverance to her mother. “All that courage comes from her,” she said.

Meanwhile, Jones’ parents had moved to the Tar Heel State. Standard had gone back to school, working on her own nursing degree. She had previously worked as a doula while living in New York. This led her to take an interest in midwifery.

After graduating from nursing, Standard worked as a travel nurse before taking a job at UNC Health. Her specialty was labor and delivery. She also works as an assistant clinical professor in the Department of Family Medicine at the UNC School of Medicine.

Standard has been a strong advocate for maternal and child health, especially among vulnerable populations. She is co-founder of 4moms2be, a group that offers support and resources to pregnant women and their families. She also received the C. Felix Harvey Award – and accompanying $75,000 grant – for Advance Institutional Priorities for her proposal for a program to train black women to become doulas. Standard led this program to train twenty black women to achieve DONA International Labor Doula certification, considered the “gold standard” of doula training. This grant helped overcome another obstacle: high training costs.

This doula training program was profile by Sci NC, a division of PBS North Carolina.

As it stands, the training of doulas is less extensive than that of nurses, doctors and other medical practitioners. “Your typical basic doula training is a really long weekend,” Standard said. “Because we produced a long program, it actually ran like an eight-week program. But it is the only profession that can have a health status that forms in a very short time.

Although Standard left a considerable mark in his role in labor and delivery, as mentioned earlier, this was far from his first professional success.

“If you’re going to do something, you can do it,” Jones said of her mother. “There really wasn’t an area where she didn’t succeed.”

According to the Centers for Disease Control and Prevention, the maternal mortality rate for black women in the United States is more than three times that of white women. Standard seeks to reduce this disparity by connecting black women with black doulas. “They (doulas) bring an extra layer of security to the birthing space for that person in labor,” Standard said.

Jones was personally affected by this disparity. “I was also a statistic in labor,” she said. “It’s being guessed when you have symptoms… and you’re kind of passed out. Because black women are doing worse, the medical community needs to change direction and say, “I have to watch out for this patient.”

In this regard, there is a need to develop pathways that increase diversity among clinicians. Jones and Standard are also working hard on this.

“Unfortunately, health disparities are not unique to working mothers,” Jones said. “It has seeped into every aspect of health care, and minorities remain underrepresented in many areas, including clinical practice, research, education and leadership.”

Recently, Jones received funding from the Clinical Investment Committee for the Critical Care Advanced Practice Provider Support Program (CCAPPS). This program aims to standardize the onboarding of newly hired critical care APPs and provide an APP professional development pathway. Jones currently serves as the Diversity Champion for the UNC Department of Medicine to promote, celebrate, and encourage engagement for diversity initiatives across the UNC Department of Medicine. She served as an evaluator for the Health Equity Academy Scholars Program under the HRSA Nursing Workforce Diversity Grant. She also co-wrote the diversity commitment statement for the American Association of Nurse Practitioners.

Jones says that through her work and that of her mother, the ultimate goal is not just representation, but to help vulnerable and marginalized populations feel safer when receiving health care. “There is definitely a mistrust of the health care community among some populations…I think having a provider who understands the experience of the population they serve and similarly their historical trauma is key to building that trust and improving patient outcomes.”

For Jones and Standard, they hope their work will leave an indelible mark on the healthcare community and inspire others to do the same.