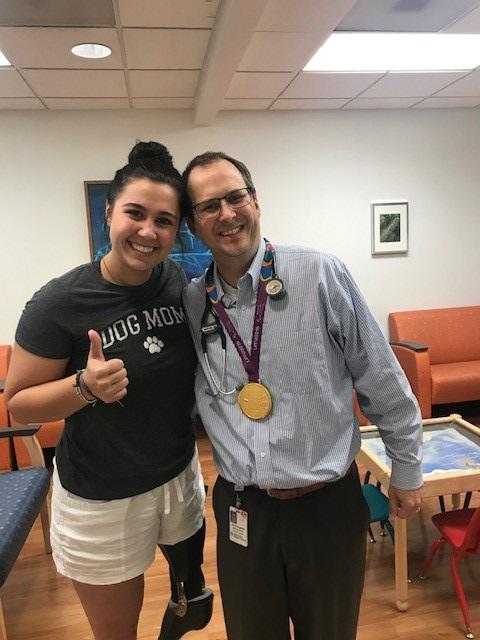 Jillian Williams has seen other athletes win gold medals through hours of training and grueling effort.

It requires the same intensity that fueled Williams through the days of surgery and illness when she was diagnosed with cancer over four years ago. Her passion for volleyball is what prompted the young athlete to undergo two cycles of therapy and several surgeries, one of which involved the removal of part of her leg.

Today, Williams is the newest member of the U.S. women’s sitting volleyball team – defending the gold medal won in 2016 – at the Tokyo 2020 Paralympic Summer Games which kicked off on Tuesday.

“It will be a summit like no other,” said Williams, 24, before leaving for Tokyo, 6,670 miles from her home in Houston. “There are so many things that we had to overcome. It’s gonna be so much fun.

Williams has spent endless hours honing her volleyball skills since learning the sport in third grade.

In high school, her parents, Trey and Janna Williams, drove her two hours from Odem (near Corpus Christi) to play in a club league in San Antonio three times a week.

Williams’ progress continued at Texas Lutheran College until she started having severe recurring pain in her left femur in 2016.

Soon the college freshman would be diagnosed with Ewing’s sarcoma, a bone and soft tissue cancer that is common in teens and children.

Williams bonded with her medical team, which helped her understand that they would do everything in their power to make sure she had the best life possible.

“I can’t thank them enough for everything they have done in my life and continue to do,” said Williams. “They know my life, just because they invest so much so that they fully know that we can trust them. I couldn’t be more grateful.

Lewis and his team gave Williams hope when his left knee and the middle part of the leg were removed to reduce the risk of the cancer coming back. But Lewis, an orthopedic oncologist at Anderson for 20 years, said Williams’ positivity was a huge factor in his success.

“It was his resilience and his attitude that made him move forward,” she said. “Really, the combination of patient and family made the procedure and recovery very easy. Overall we were a great team.

Sugalski said Williams was a model patient, “always doing what they asked for, and it shows.”

“He’s an amazing person,” Sugalski said. “She was enthusiastic with the support of the family. She didn’t miss any appointments and took on the challenges head-on. His ultimate goal was to play volleyball again.

A self-proclaimed planner, Williams had to learn that she was not in control of everything in her life.

“God has a plan,” Williams said. “My job is to introduce myself every day and be grateful for the life given to me.”

In January 2017, she rang the ceremonial bell that signaled the end of her chemotherapy and follow-up appointments. Then she began her return to court. This time the pitch was smaller, the net lower and she was sitting in a faster game.

During her treatment, Williams read a Sports Illustrated story about Lora Webster of the United States sitting volleyball team who had undergone a similar procedure to have part of her leg removed. Williams therefore sent a message to Webster, who was playing at the Rio 2016 Paralympic Games, to get the team’s contact details.

Three months after her treatments, Williams was invited to train with the national sitting volleyball team in Edmond, Oklahoma. In May 2017, she started the USA Volleyball A2 program, which powers the national team. She had been in the program for three months when a coach recommended that she move to Oklahoma to develop her skills.

“Without it, I probably wouldn’t be the athlete I am today,” said Williams. “I was completely immersed in it.”

There have been a lot more changes in his life. Williams received her BA in Marketing with a focus on Professional Sales from the University of Central Oklahoma at Edmond. She also married Kyle Coffee, a firefighter with the Harris County Hazardous Materials Response Team.

Although Williams’ family is not at the games, they will have reminders of it. She is carrying her teddy bear, Pinky, which she has had throughout the treatment. The stuffed animal has been with her every day since second grade, except once while training in Oklahoma when she left him with her parents. She hasn’t been without a bear for long – they’ve spent the night at her house.

Williams is eager to take the field, playing in the middle. This is the position she has held her entire career – always ready to step in where needed.

“I love that my teammates and coaches know that wherever they put me they can trust me,” said Williams, “to do my best.”