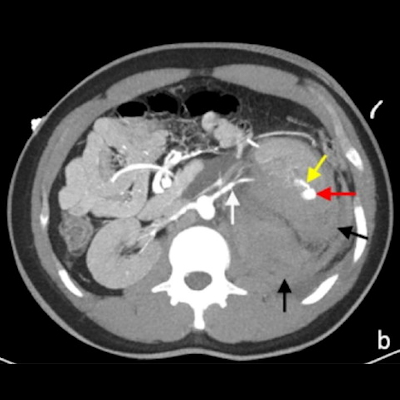 Keeping Up With Kidney Complications Can Help Save Lives

“The role of the radiologist in detecting potential complications on imaging kidney procedures is, as such, more important than ever, especially with the widespread shift to less invasive approaches,” they wrote in an article. published on July 18 by Imagery preview.

Potential vascular and non-vascular complications can arise from surgical, extracorporeal shockwave, radiotherapy, and renal radiologic procedures, including image-guided percutaneous biopsy and drainage, the authors continued. Radiologists play a crucial role in recognizing and diagnosing post-renal complications on CT scans, and their actions can dramatically improve the patient’s prognosis.

(A) CT image of the arterial phase of a perinephric hematoma (white arrow) at the site of partial nephrectomy. The residual left kidney is indicated by the yellow arrow. (B) Active contrast extravasation (white arrow) was confirmed by digital subtraction angiography. All figures are courtesy of Dr Jean SZ Lee and colleagues and Imagery preview.

Laparoscopic open radical nephrectomy is the gold standard in the management of large renal masses. For smaller lesions, nephron sparing procedures such as partial nephrectomy or percutaneous therapy are increasingly preferred.

“Early CT is indicated to assess clinically suspected complications of surgery and to allow early management,” said Lee and colleagues. “Two main complications after nephrectomy requiring CT are hemorrhage and urinary leakage. Postoperative bleeding can occur from an unsecured artery, or days to weeks later due to a ruptured false aneurysm from an intrarenal artery.

The presence of a postoperative perinephric hematoma can be demonstrated by CT, ultrasound, or MRI, but the site of active bleeding is best demonstrated on CT angiography or digital subtraction angiography (DSA).

The surgical management of urinary tract stones has evolved from open surgery to a range of minimally invasive procedures. With the exception of complex deer horn stones, a range of minimally invasive techniques have been used by urologists to treat urinary tract stones, including extracorporeal shock wave lithotripsy (ESWL) and ureteroscopy, flexible ureteroscopy and percutaneous nephrolithotomy (PCNL).

The choice of each technique is influenced by the surgeon’s experience, the nature of the stone load, the location of the stones, the anatomy of the urinary tract and the patient’s preferences.

One of the most common complications of ESWL is the formation of a perinephric or subcapsular hematoma, with an incidence of approximately 4%. The risk of post-ESL renal hematoma is significantly increased with the age of the patient, the use of a therapeutic dose of low molecular weight heparin and the presence of an untreated urinary tract infection. Compression of the kidney resulting from perinephric or subcapsular hematoma has been reported to cause systemic hypertension, also known as Page’s kidney.

Arteriovenous fistula occurs in up to 10-15% of patients after percutaneous allograft biopsy in kidney transplant patients, with up to 10% lower rates after native kidney biopsy.

Axial post-contrast arterial phase CT images of vascular complications after 14-gauge ultrasound-guided untargeted biopsies of the left kidney in two patients. (A) Arteriovenous fistula. There is a fistulous connection (red arrow) between the left renal artery (white arrow) and the left renal vein (yellow) with an associated early arterial enhancement of the proximal left renal vein, inside the arteriovenous fistula. There is an associated retroperitoneal hematoma (black arrow). (B) Arterial pseudoaneurysm. A small pseudoaneurysm (red arrow) originating from a segmental branch of the left renal artery (yellow arrow) is visualized as a small adjacent focus of rounded arterial enhancement (red arrow). The left main renal artery is also visible (white arrow). There is an associated left perinephric and retroperitoneal hematoma (black arrows).

The follow-up Doppler ultrasound shows that more than 95% of the detected fistulas were asymptomatic and about 95% of the fistulas resolved spontaneously three months after the biopsy. A small number of patients develop hemodynamically significant bleeding and require treatment. Arteriovenous fistulas lead to early arterial enhancement of the involved vein, with enhancement similar to that of the abdominal aorta and renal arteries.

Tumor seeding along the percutaneous biopsy tract is rare, with an estimated incidence of around 1 in 3,000, according to the authors. Patients with papillary renal cell carcinoma, grade or higher stage tumor may be at higher risk of tumor seeding. Tumor seeding after surgery is also extremely rare, accounting for less than 0.1% of cases.

MRI (B) and PET-CT (C) images with T1 (A) and T2 weighted fat suppression of recurrent transitional cell carcinoma in the scar of the right anterolateral abdominal wall (white arrow).

Transitional cell carcinomas constitute the majority of cases. Two cases of seeding of renal cell carcinoma along the path of the cryoablation probe have been reported. Intraperitoneal metastases have also been reported after radiofrequency ablation. Port site metastases are associated with a poor prognosis. Tumor seeding foci generally exhibit imaging characteristics similar to those of the primary tumor, the Melbourne team concluded.

Wilmington firefighters are equipped and trained to handle medical calls

How long is too early to have a facelift?