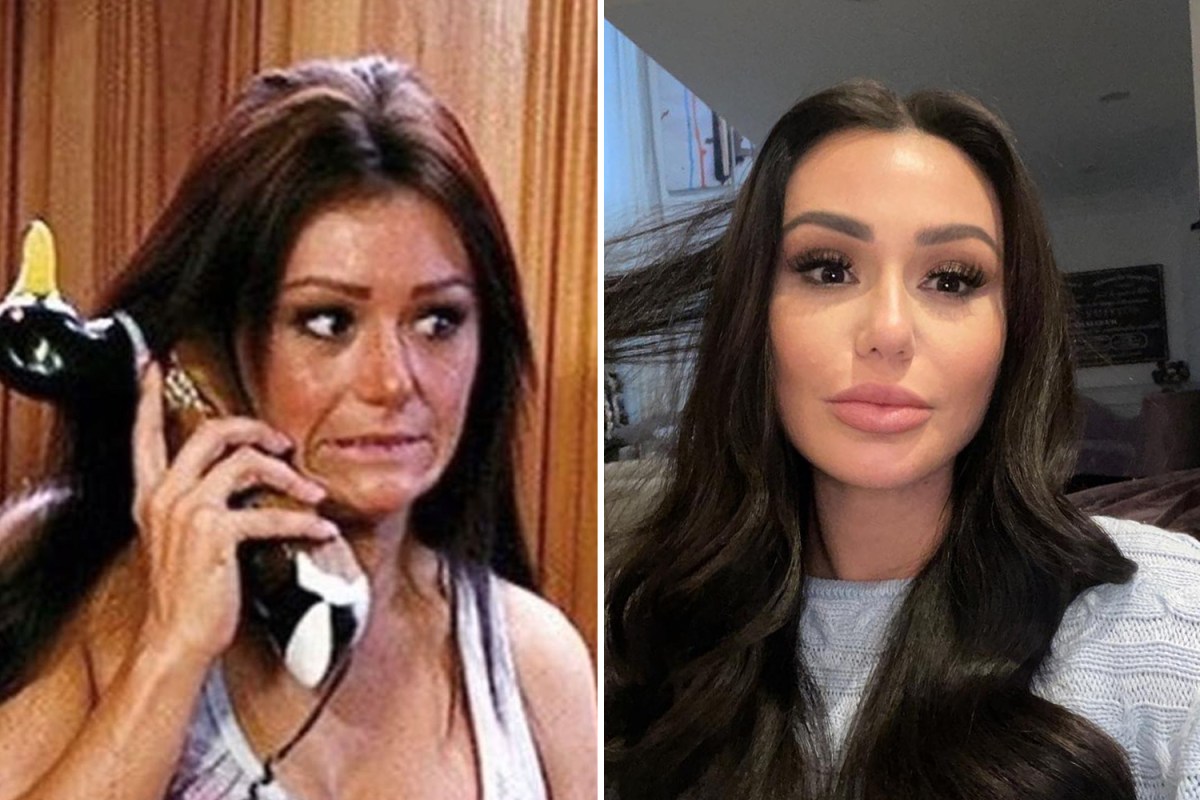 JERSEY Shore star Jenni “JWoww” Farley looked unrecognizable in a throwback photo she shared from her debut on the reality series.

The TV personality, 35, posted the old snap to celebrate the revival show, Family Vacation, which reached its 100th episode this week.

In the photo resurfaced from Season 3, JWoww was holding the house duck phone to his ear.

She recoiled from someone off camera as she listened intently to the person on the other end of the line.

She wore a low-cut white tank top with “rebel” written across the chest that teased her cleavage.

In the caption, the reality star wrote, “Don’t forget to tune in to the 100th EPISODE of @jerseyshore’s family vacation tonight at 8pm on @mtv.”

Although her lips look noticeably bigger now than they did when she debuted on Jersey Shore, the TV star told People she “don’t like to touch her face.”

“I don’t like touching my face just because I’m always scared you can never go back. All those nose jobs and cheek implants and stuff like that, people get them and can never go back to what they were. I like my nose,” the star told the outlet.

In 2016, the mother-of-two opened up about her various procedures, although she denied pursuing “invasive” surgeries until later in life.

She told ET at the time, “I’m 31. I am not getting any younger. I’m going to do non-invasive surgeries and things like that.

The MTV star got engaged to boyfriend Zack Clayton Carpinello in March.

Lately, fans have thought JWoww looks more like Kim Kardashian than her old self.

Subscribers told the Jersey Shore star she “looks like a Kardashian.”

One social media user asked, “Why do you look like Kim Kardashian? I don’t recognize you, Jenni.”

Another called Jenni a “clone” of the Skims founder.

Others pointed out that now Jenni and her co-star Angelina Pivarnick look alike, as the latter has also been dubbed a hearty Kim copycat recently.

Fans had even slammed Angelina for seemingly trying so hard to be a Kardashian that she “photoshopped” herself to look more like one.

In a snap late last year, she posed for a glamorous photo in a form-fitting black dress, with a V-neck showing off ample cleavage.

She kept her hair in a half-up, half-down look and had her face completely made up with smokey eyes, dark eyebrows, glossy lips and rosy cheeks.

Fans on Reddit said she looked great, but criticized her for using so much “photoshop” to make her look like this, saying she was stepping into “Kardashian territory”.

One fan said she’s “not fooling anyone” because they see her “on TV every week” on MTV.

Some said they “thought it was a Kardashian until” they looked at Angelina’s name and it’s probably “90% photoshop.”

During her first appearance on Jersey Shore, she claimed she was Staten Island’s version of Kim and it seems to have come true.

When Angelina first appeared inside the Jersey Shore beach house in 2009, she had super tanned skin, short hair with side bangs, rocked shorts and a mini dress.