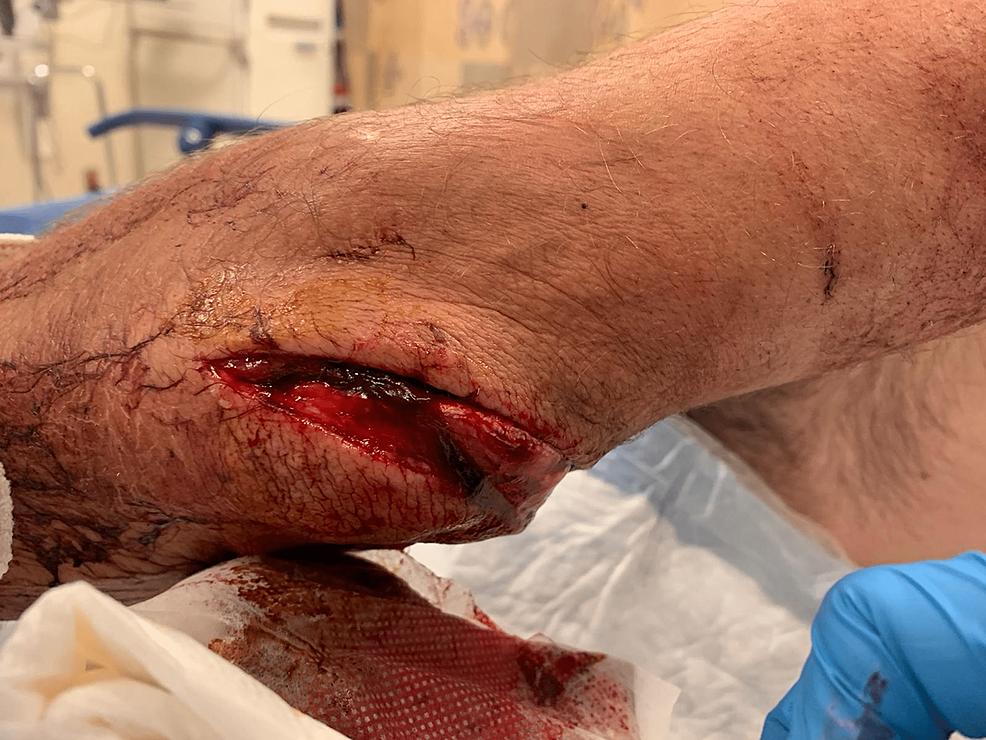 Ulnar nerve dysfunction following distal humeral fractures is a recognized phenomenon. There is no prevailing consensus on the optimal management of the ulnar nerve during surgery for these fractures between leaving the nerve in situ versus nerve transposition for better healing. Additional complexities arise in the case we present, in which there was an open fracture aggravated by laceration of the ulnar nerve following a traumatic injury with a machete knife. We review and discuss the management of ulnar nerve injuries associated with complex open fractures of the humerus to optimize patient outcomes following these injuries.

Machete trauma to the extremities can inflict significant injury. Lacerations extend deep into soft tissue and other structures, which can create additional complexities in management. Although these injuries are not common, reconstructive surgeons may be needed for deep and complex injuries caused by a machete. [1,2]. In addition to injury management, a review of 48 patients documented social factors, including psychiatric history and substance and tobacco use in those assaulted with a machete, which can create other challenges in the management of these patients. [1]. We review the case of a homeless man with upper extremity machete trauma. The elbow injuries included lacerations to the ulnar nerve, soft tissue and triceps muscle, as well as a humeral fracture. We discuss the case and highlight the complexities of such injuries and highlight the management of the ulnar nerve.

Presentation of the case

A 40-year-old homeless man with polydrug addiction was admitted to hospital after being attacked with a machete and sustaining a deep complex laceration of the elbow (Figure 1).

On physical examination, in addition to a 10 cm long and 3 cm deep laceration on the posteromedial aspect of his left elbow, it was noted that he had an inability to extend his forearm. as well as impaired finger movement of the fourth and fifth fingers with loss of abduction and adduction and numbness on the ulnar side of the hand and fingers. He had strong pulses in the radial and ulnar arteries and good capillary refill throughout. Radiographs showed clarity of the left medial epicondyle consistent with an undisplaced fracture (Figure 2).

Figure
2: Initial radiograph of the left elbow with fracture of the medial epicondyle (white arrow)

He underwent immediate operative exploration, which revealed a traumatic left elbow arthrotomy with laceration of the triceps tendon as well as an intra-articular fracture of the left distal humerus and a complete section of the ulnar nerve without significant abnormality (Figure 3).

Procedures performed included full wound irrigation and debridement of the traumatic left elbow arthrotomy. Open reduction and internal fixation of a displaced intra-articular distal humerus fracture was performed using cannulated grub screws, three in the medial epicondyle and two through the trochlea with restoration of the intra-articular anatomy (Figure 4).

The triceps tendon laceration repair was then completed with a suture anchor and fiber thread, and attention was turned to the severed ulnar nerve. The proximal ulnar nerve was meticulously dissected from within Guyon’s canal and the distal segment was noted just distal to Osborne’s fascia. We elected to perform ulnar nerve repair and transposition due to the extensive soft tissue damage and fractures at the surgical site to remove any excess stress from the repair, as well as limit any scarring to facilitate the repair. ‘coming. nerve transfer procedures. The ulnar nerve was repaired primarily with 10 nylon 8-0 circumferential epineurial sutures using a surgical microscope with no tension noted (Figure 5).

A subcutaneous fascial sling was then developed just beyond the region of injury, and the nerve transposed and secured with 3-0 Biosyn™ sutures. There was no significant tension noted after transposition, and there was good nerve freedom with movement of the arm and elbow joint, with no ulnar nerve subluxation with the elbow flexion test. The wound was irrigated once more, and after the laceration closed, the arm was splinted with an elbow splint with 90 degree flexion. The patient was assessed after the operation and noted that the physical examination findings were slightly improved compared to before, with decreased sensation and motor function of the left fourth and fifth fingers. Unfortunately, the day after the repair, the patient left against medical advice and could not be located for follow-up.

Extremity trauma from a machete can inflict significant injuries with multiple combined soft tissue and bone injuries, which can complicate management. Significant social factors, including homelessness, substance use, and documented psychiatric history, may further complicate the management of individuals suffering from aggression and trauma. An interesting part of the operative case involves the management of the ulnar nerve injury. Injuries such as distal humerus fractures around the elbow may involve in situ repair or, sometimes, transposition of the nerve. Overall, the optimal manipulation of the ulnar nerve, whether releasing and leaving in place or transposing the nerve, during repair of distal humeral fractures remains controversial. [3]. Although routine transposition may increase the risk of morbidity, such as nerve dysfunction [3-6] and also have an increased likelihood of ulnar neuritis compared to alternatives [4], different mechanisms and other traumatic factors must be taken into account in some cases for optimal manipulation of the nerves. Although there is no consensus on definitions of ulnar nerve instability, the factors commonly influencing their decision to proceed with anterior ulnar nerve transposition are subluxation on examination. In cases of nerve compression as in the cubital tunnel with muscle atrophy, nerve transposition is currently being considered. Since there is a lack of data on ulnar nerve laceration with soft tissue injury and transposition of the nerve in a complex laceration as in our case, we highlight this case and discuss the management of the nerve in this context. We chose to transpose the nerve to aid in nerve healing, without tension, as well as place the nerve repair in an area outside of the complex soft tissue and triceps repairs and humerus fracture. This would likely produce a less localized inflammatory response and decreased scar tissue formation, which would aid in future planning for possible nerve transfer, including an end-to-end supercharged anterior interosseous transfer of the ulnar motor nerve for reinnervation intrinsic to the muscles. [7]. This planned procedure would be beneficial in this case of upper ulnar nerve injury to reduce long-term forearm and hand muscle dysfunction and cubital tunnel syndrome. An additional benefit of transposition can be attributed to increased nerve overlap during repair to aid healing and recovery of function. [8]. Unfortunately, the patient was lost to follow-up so that we could perform this and follow up on the repairs.

Trauma to machete extremities can inflict significant injury to multiple structures and require complex multidisciplinary care for treatment and repair. In our case, there were soft tissue injuries including triceps tendon lacerations, lacerated ulnar nerve and humerus fracture. With respect to ulnar nerve repair, although no studies have specifically examined ulnar nerve transposition after laceration repair with concurrent humeral fractures, we chose to transpose the nerve in our case to aid in transposition. tension-free nerve healing as well as placing the nerve in an area outside of complex humerus and triceps repairs. Further studies examining optimal repair of critical nerves in the setting of complex injury are warranted. In addition, social risk factors related to leaving against medical advice and complex upper extremity lacerations are worth exploring on a larger scale.